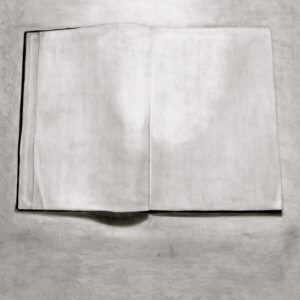 Lumine: All the Unnamed – LP

Preternaturally gifted multi-instrumentalist Timo Van Lujik (Af Ursine, Elodie) meets Canadian improvisor Graham Stewart – ov Violence And The Sacred – in a probing new duo, Lumine, who debut with the uneasy and pensive minimal classical ambience of All The Unnamed for Van Lujik’s private press label, La Scie Dorée. Part of a strong batch of new slabs featuring Van Lujik, this one is by any measure the most brooding and sparse of the lot. But just like practically anything Van Lujik is involved with, there’s a nuance and sensitivity to light and emotion which places this one beyond your usual dank or dark categories in a more ambiguous place streaked with quietly fleeting emotions. Working at typically low volume levels from the outset, Lumine stealthily draw our focus to a bed of bass like dry ice, swirling at the feet while they coax out keening silhouettes of drone and midnight jazz figures in the mid-range, middle-ground leaving acres of room in the upper registers to be haunted by quivering electronic timbres and plasmic apparitions. A delicate, frayed narrative unfolds from these seemingly abstract scenes, revealing a glacial interplay of tension and dramaturgy of desolate melodies that linger on the mind with languid form. In a similar way to the work of Belgium’s Kreng, All The Unnamed could quite easily be the soundtrack to an achingly slow and cerebral film noir, or even some particularly long and engrossing scene from a Lynch flick, but, where say Bohren Und Der Club of Gore play into your sense of anticipation, Van Lujik and Stewart really play around it, placing us on tenterhooks from the coruscating hush of Trakl right thru the chamber-like drift of Bachman, to a sublime denouement of percolated bass, eloquent strings and chimes in Ko Un, where the sublime tension dissipates into the ether and you’ll want to do it all again.