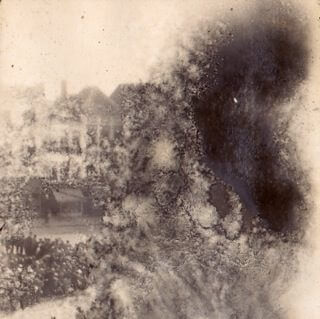 AF URSIN : Aika
Aika by Af Ursin (the moniker that enshrouds musical maverick Timo Van Luijk) completely took me by surprise, blind-sighted me and filled my juvenile musical eagerness with hope beyond belief. Finally a record that had originality, addictive tonal colorizations and above all a sound that resembled no other. Right from its first crackly loops, “Aika” casted a spell on me and sucked me into an abyss filled with cinematographic visions, ritualistic mood swings and sacred pulsating vibrations. Built up out of an intuitive approach and injected with a crackling dusty approach to the overall sound, the minimal slowly building animated strive adds to the enhancement of the music and gives it already skeletal nature undercurrents of depth that keep on sucking you in. Bestowed with occasional haunting echoes of winter-beating polar plains, Af Ursin’s musical wonderland is deceptively casual yet intense in its feeling and meticulous in its musical detail and its lyrical economy. It offers an austere intimacy, which jacks in directly and gives access to the artist’s pulsing brain. And although the music seems to be superficially drenched in a dilapidated past, it is nevertheless the most viperous statement of how sounds should be commenting on this very moment. Limited edition of only 150 numbered copies, each gatefold jacket is meticulously been assembled by the artist himself, making that there are no two jackets alike. Apart from giving you sonic beauty, this release is also an aesthetical statement in packaging. This is without a doubt the best disc to seep out of 2008. Mark my words, this one will skyrocket in the months to come once some daring and adventurous minds will unlock its sonic mysteries and start howling at the moon. (Tiliqua Records)

We are dealing with a brand new record by Timo van Luijk, also known as Af Ursin and together with Raymond Dijkstra, Asra. Timo handed me his record at their recent concert in Extrapool, and told me a few things to note. All of the package is handmade. He reversed old gate fold record sleeves and printed them by hand. Inner sleeves as well as the plastic outer sleeve are all re-used. He also mentioned that the record may sounded like a bad pressing, but its just the addition of extra hiss and crackles in the music. It seems that everything about this record is old, and Van Luijk also had his grandmother contribute voice. This record, the music that is on it, is not from these times. It just isn’t. Af Ursin plays music that sounds ‘old’, like browsing sepia toned photographs from, well, why not, your grandparents. Piano, saxophones, drums, percussion, the voice, some extra crackles, hardly any electronics around here (if any at all), although in a piece like ‘Sortilege’ I am not too sure of that. Recorded on analogue tape, obviously, this is truly a beautiful record. Nothing new, but aged beauty. (Frans de Waard/Vital)

Stunning ghostly new work from Timo Van Luijk, a collaborator with Andrew Chalk and member of In Camera with Christoph Heemann. Aika was originally issued in 2008 with different cover art and this upgraded edition should hopefully bring attention to one of the major European devotional drone recordings of the decade. Indeed, Aika explodes simple notions of ‘drone’ with a more musical and instrument-based palette that crosses high Gothic form with a beautifully blurred sense of spatial dynamics – all smears of sound and great halos of reverb – touching on the music of Arvo Part and Grouper as much as Chalk and Heemann. The set opens with a lonely baroque piano performance, echoing around an empty room, before the album opens into a grand amphitheatre of disembodied valkyrie choirs and epic drone ascensions that combine the awe-inspiring vistas of early Tangerine Dream with cultic percussion and a dissolved European classical appeal. The second side feels even more ‘classical’ in its construction, with a marriage of reeds and electronics that feels like a synthesized Mahler or Ingram Marshall’s fog horn compositions re-visioned by Moondog and Cadentia Nova Danica. Aika is a singular work of New European Drone that pretty much explodes the genre and it’s a treat to have this available once more, so don’t miss out. Edition of 400 copies. Highly recommended! (David Keenan/Volcanic Tongue)

Subtitled “Un Réveil Sidérant Dans Le Passé Décomposé”, this new LP by Af Ursin – the solo project of Timo Van Luijk, of Noise-Maker’s Fifes and In Camera fame – comes in a sepia-tinged non-figurative cover reminiscent of Mirror and Andrew Chalk’s artworks. The first side starts with simple (but not simplistic) wind / brass counterpoint, soon replaced by the mysterious “Marche Arrière”, with its echoes of early Univers Zero (that bassoon demarcating the general gloom..). The closure is an atonally wavering abstraction of pre-taped womanly pitches, initially disturbed then besieged by weird electronic noises, somewhere between Akira Rabelais, György Ligeti and Rafael Toral’s recent machinations. The second part begins with a short melancholic introduction for ancient-sounding piano – think Asher subjected to a further spin of a time machine – leading to the eerily seducing sonorities of “Un Réveil”, whose sparse orchestral elements and recurring ghostly voices are gradually sustained by an unremitting slow pulse (tubas?). Tony Conrad meets Yog Sothoth, the puzzlement even greater than before. Anyhow, don’t mind the comparisons: Van Luijk is a legitimate representative of no-frills, all-substance sound art. (Massimo Ricci/Paris Transatlantic)

Af Ursin is Timo Van Luijk’s solo project and Aika is a reissue of a very limited LP from 2008. I am glad to see this one gain a wider release as the music is fantastic. The entire record is bathed in a low lying fog of surface noise which really, really reminds me of a lot of the classical music I listen to from the 20s and 30s. The mists of history. Each of the five pieces has different instrumentation with solo piano, tape manipulation, keyboards, horns, percussion, strings, and voice all taking their turns. The overall mood is stately and melancholy and always minimal and arresting. There are touches of 20th century classical composition or perhaps RIO without the heavy instrumentalism. This is a truly superb LP, impeccably organized and sequenced. I don’t think I’ve ever heard anything quite like it, and that is saying something. Small Details Dept: I love the way the surface noise continues between the tracks and in the run off grooves. That is nice. Here’s to you, Timo! Top shelf! (Scott Foust/Swill Radio)