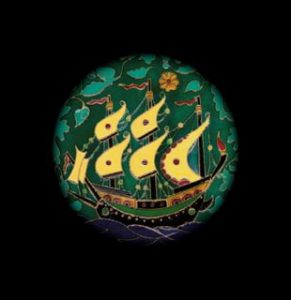 TIMO VAN LUIJK & FREDERIK CROENE : Voile au Vent
The cover of Voile au Vent features a sailing ship that is being carried by the wind inside its sails. The image seems to recall the past rather than the present. The ship is surrounded by utter impenetrable darkness. Even though one can see beautiful drawings of delicate flowers in the background, this scene brings to my mind rather the gothic horror tales of Edgar Allan Poe – specifically ‘The Narrative of Arthur Gordon Pym of Nantucket’ which deals with a ship lost in the frozen waters of the Arctic – rather than beauty or serenity.
The record itself starts off with a warm and brooding drone. It is followed by piano keys rambling like skeleton fingers and a beat that sounds like a wooden heartbeat. Such is our entry into the wondrous gothic world of Frederik Croene & Timo van Luijk. A duo whose approach is entirely introspective and devoid of outside influences whilst remaining aware of their existence. Timo van Luijk appears to be intend on releasing his work on vinyl only, despite of most people’s opinion that it is a dead medium from a haunted past. He also happens to run the tiny label that honours this ancient medium and has released a miniature output of records – six in the past seven years – thus creating a discography that is closer to the treasure chest of a secret society, rather than an enterprise bent on making profit.
The second piece opens with warm brass sounds which are reminiscent of foghorns signaling a ship that is coming from a distant journey and is about to enter a foreign port. These sounds are followed by a brief military drum passage and ghostly, ominous, twangy string sounds set in as an accompaniment. These sounds were most likely curled from the intestines of a piano. Although the instrument has been around for centuries, it would appear that all of its potential has been exhausted by now. Frederik Croene is bent on drawing new sounds, and appears to be highly successful in this.
Side B opens up with an aural vision that reminds me of haunted houses and children’s lullabies in equal measures. The piece is moody and shimmering, reminiscent of a fata morgana. It seems to be more intent on conjuring up visions rather than bringing a mere piece of music to the forefront. The final piece on this release differs a bit from the others since it seems to be throwing a huge chunk of modern classical music into the stew. There are triangles, Sciarrino like flutes, Lachenmann’s crashing pianos are also present as well as a brief funky bass to be found. It is a curios epilogue to an equally mystique album. Voile au Vent is unsettling and soothing in equal measures; partially modern and partially gothic. Comes highly recommended. (77ships, the hedonistic monk)

This is a record of astonishing beauty. The first side made me feel like I was tiptoeing through a magical garden at twilight, the second cast me out into a forgotten sea. Timo is an improviser of the first order- everything he creates is worthy of your attention, but if you start anywhere, then start HERE. It’s limited as well, so be fast!
(Edward Ka-Spel)

I remember having written about Croene’s Hout CD in duo with Esther Venrooy quite a while ago but, other than that, my familiarity with his methods of expression was virtually nonexistent to date. Mea culpa: the absolutely brilliant Voile Au Vent – performed by him and Van Luijk on an array of unspecified instruments besides the evidently recognizable ones – immediately startles with the opening track “Vortex”, magnificently weird oscillations of pitches following a funereal bass line among echoes of warped pianos and hazily subversive chorales underlined by cheap beats. “Libersee” keeps things interesting by mixing what sounds like comatose reeds and different types of exhausted orchestral sources with acerbically echoing notes in the high register of a completely misshapen mysterious instrument (perhaps it’s piano again?) and assorted kinds of heavy percussion. Unique, to say the least. Side B begins with “…Pour Que Le Vent…”, a ghostly – and occasionally rather scary – accumulation of tolling metals, clusters of flutes, abnormal shrieks, hovering presences and rumbles from the underground likely to transport the listener straight into a luminously preposterous Puzzleland. The final “Triangle Du Diable” exploits the suspense elicited by a boundless tendency to the destruction of an actual harmonic tissue, doing it via practical suggestions in the shape of familiar instrumental voices, concise stop-and-go’s and wavering electronics assembled over various strata of improvisational inspection of the psyche. Halfway through flexible and delirious, this is a great record under any circumstance.
(Massimo Ricci)

As no information is provided on the (beautifully produced) jacket as to who’s playing what on these four atmospheric and intriguingly evocative pieces from this Belgium-based duo, you’ll just have to guess. Not that the instruments themselves are hard to identify: there’s a piano that sounds like it’s been left out in the rain for a month, plenty of percussion, from groaning rubbed drumheads to tiny pulsing triangle (appropriately on “Triangle du Diable”), assorted woodwinds, glistening organ, occasional dub-lite bass and much more, courtesy Frederik Croene – who’s a pianist, as far as I’ve been able to discover – and Finnish-born Timo van Luijk. File under New Weird, if you like. Though there are no vocals (thank God – all you need to spoil this is some Tibet/Balance wannabe rabbiting on about Aleister Crowley or some other occult bore), these are songs of sorts, with recognisable repeating elements – bass lines, pulses – and will appeal to fans of Finnish free folk and Nurse With Wound-style surrealism alike. Gorgeous stuff. (Dan Warburton, Paris Transatlantic)

The work that involves Timo van Luijk is always presented in the best possible way. No pennies are saved to make sure the listener has something great (literally in the shape of a LP) in his hands. No cheap, easy CD, but a small piece of art. Not that these art pieces provide you with much information. ‘Voile Au Vent’ for instance just states the names of Van Luijk and Frederik Croene, when and where it was recorded and the name of the label, but nothing much else. Of Van Luijk we know he plays trumpet, electronics, toys and such like, and Croene, we learn somewhere else, is a piano player. Over the years Van Luijk has moved in his solo and collaborative work towards more traditional forms of improvised music. While he is responsible for the electronic part of it, always loose and free, waving just above the ground, the other player, a pianist in this case, places both of them on the ground with his playing. Although I must say that it seems to me here that Croene is also using electronics in his music. Four pieces are played here of which one ‘… Pour Que Le Vent…’ has a regular rhythm of some kind, and is the most worked out, i.e. composed piece of music, it seems. But all four pieces are equally great I think. A remarkable outsider record, of someone who doesn’t care about trends and such like. (Frans de Waard, Vital Weekly)

Voile Au Vent is just an excellent release. It is a very hard to pigeonhole and how often does one say that these days? Piano, keyboards, sax guitar, bass, flute, some percussion and rhythm box, and who knows what else. Each of the four tracks has its own sound and direction. The pieces sometimes have a David Jackman-style portentousness to them, especially on side one. I mean that as a high compliment. The sound is an odd cross between the early 80s UK cassette underground and the spacier moments of 70s ECM records. I had better have another drink and play it again. Beautiful sleeve and design. (Scott Foust, Swill Radio)