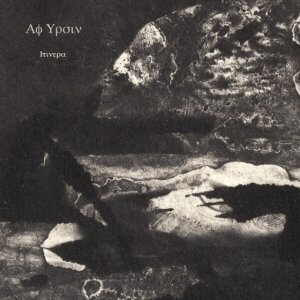 First full electronic album, played, recorded and mixed by Timo van Luijk at Kulta Saha 2016-2017
“An imaginary one way trip through microcosmic oscillations in seven macrosonic constellations. The space of sound versus the sound of space”

Special edition of 99 copies on black vinyl with painted collage sleeve, handtyped text and stamp, signed and numbered. Each sleeve is unique.

A breathtaking, ancient-sounding and otherworldly suite of electronics from Timo Van Lujik in his Af Ursin garb – the first entirely electronic record made at his Kulta Saha studio. It’s ear-watering stuff that crosses lines between early Oramics, the sheer gradients of Jaap Vink’s algorithmic tape recordings and the subtlest, classic deep/inner space soundtracks of Tarkovsky films or Vangelis interludes, but even still, those comparisons stop short of capturing the intoxicating, abstract enigma at work. Written in respective dedication to Eric Faes (with whom Van Lujik collaborated as part of Noise-Maker’s Fifes in the ‘90s) and Xavier Bastiaensen, this is music for cutting the cord, severing communications and drifting off at tangents to the known world. Of course that’s always a nice thought and probably at the back of the mind for many sonic astronauts, but it’s one that’s impeccably explored and brought to life with unfathomable grasp of depth perception and deliquescent harmonic colouring here. Aside from Van Lujik’s work in the Elodie duo with Andrew Chalk, we still vividly recall his Aura Legato [2005/2016] release which was brought to our attention on a Blackest Ever Black reissue. Safe to say, then, that this one sounds naught like the parallel acoustic world suggested by Aura Legato, and much closer to what we’d imagine as deep space music, setting spatial parameters at the very limits of our proprioception in a way that encourages us to think of the universe in 3D. Sounds appear above, behind, between and beyond the ears in headphones, and likewise project filigree starmaps of sound from the speakers – meshing pointillist glimmers into sweeping, moire contours that fascinate and suspend the listener from every angle. What a record.

The webshop is temporarily closed due to changes in shipping rates. If you want to place an order, please send your request by email until further notice. Dismiss