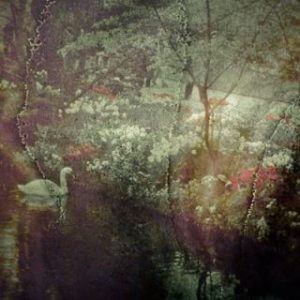 Since splitting up with Christoph Heeman as Mirror, I haven’t followed the recent work of Andrew Chalk. It simply seems to be moving outside my view. Heeman started a collaboration as In Camera with Timo van Luijk and now its the turn of Chalk to also work with Van Luijk as Elodie. This might be their first record together and what is odd, knowing the work of either of them, is that this is not one of those ‘one drone per side’ kind of LPs. This LP has no less than thirteen tracks, which perhaps sees them moving into something which is less drone oriented and something that is altogether more acoustic in approach. Van Luijk’s curious collection of small acoustic objects and wind instruments and Chalk’s sparse guitar playing. The record opens with a layered piece of various wind instruments and as such may count as a drone piece, but other pieces are more of an open spaced improvised nature of rattling bells, small metallic sounds, and Chalk’s watery electric guitar, along with charming field recordings. The pieces are more like open ended sketches then fully realized compositions, which adds the charm of the record. Throughout a fine record of shimmering, small melodies, rusty percussion, bird calls and a gentle mood. The perfect early spring record: open your windows, let outdoor sounds in and simply enjoy the good life. (Frans de Waard, Vital Weekly)

Debut of a new duo consisting of Timo Van Luijk and Andrew Chalk . As you might expect with this imprint, it’s a vinyl edition with typically attractive retro cover art. Divided into rather short fragments, the music perfectly corresponds to the album title. It’s a little jewel where one can almost smell the flowers and the grass surrounding the players (Van Luijk and Chalk with Daisuke Suzuki on percussion on one track) occasionally captured in open-air settings with twittering blackbirds and flowing water underlining the serene pensiveness of guitars, zithers (?), unspecified wind instruments and electronic keyboards. The tender intensity and honest introspectiveness of this bucolic idiom (Darren Tate also comes to mind) never fails to entice, even in episodes that border on naiveté. When, in “Racines Eternelles”, a bagpipe drone is carved by the straightforward melody of what appears as a cheap clarinet, the heart inexplicably starts to beat more regularly. But with the fleeting finale “Impression Lointaine”, it nearly stops. (Massimo Ricci/Paris Transatlantic)

Elodie is Andrew Chalk and Timo van Luijk. I guess it takes three people to make a supergroup (a la Tart or Cream), but if it only took two, Elodie would certainly be one. There are eleven pieces all of which vary in their instrumentation and structure. At the same time, there is an overwhelming cohesiveness to the procedures that nicely ties the whole LP together. I actually am reminded a bit of the first Tart LP in which we tried a number of different approaches. Elodie’s sound is much more tranquil. Echos Pastoraux is a superb LP of glimpses from another time, another place. If you enjoy the music of either of these fine fellows, you will not be disappointed. If you do not enjoy their music, perhaps a serious personal inventory is in order. (Scott Foust/Swill radio)