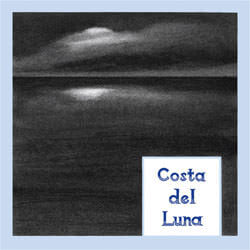 These last couple of years the creative talent of Belgium based Timo van Luijk never fails to amaze me and on this album, a collaborative effort with percussionist Kris Vanderstraten, he again confirms it. Vanderstraten and Van Luijk have played together before, but unlike their previous album “High Noon”, “Costa Del Luna” sees them both in a slightly different setting, more austere and carefully erected out of dusty late night encounters. Here the musical outcome is less AMM inspired and more bordering on ethereal planes that are reminiscent of France’s OM or Bertoia’s sonic worlds cross-breeding with an almost “Musik Fur Alle” era Anima aesthetic. Just like a reptile’s tail is a remnant of a long lost revolution, the duo here also slowly feeds of each other’s tiniest gestures and articulations in sound in order to trigger in response panoramic sound clusters that float somewhere between a poetic resonance of skeletal music and a shamanistic sense of poetry, all encapsulated in sonic molecules drifting in between your speakers. One of the best discs to have been released in that unholy year 2008, but again nobody seemed to notice it. Take my word for it, this record has the gift for unexpected impact, busy folding and manipulating the dead space that resides between your ears. Housed in a very beautiful jacket, with the inside lined out with imprinted shrimps floating against a blue toned background. Gonna be a major one in years to come, so mark my words. Awesome! (Johan Wellens, Tiliqua Records)

Timo Van Luijk (zither, flute, keyboards, tape) is half of the In Camera duo – the second element being of course Christoph Heemann – while this is probably the first time that I met Kris Vanderstraeten (percussion), but I’m not really sure about this. “Costa Del Luna” is a vinyl album – a format that many artists active in this area still prefer to CD – containing a collection of rather nocturnal atmospheres based on improvised settings. Amidst ample spaces and doubtful movements, small percussive elucubrations and detailed crossings of different rubs and abrasions morph continuously, their shapes changing according to the succession of contexts. In the background, the presence of Van Luijk’s taped paraphernalia contributes to the overall scent of altered reality which defines the whole record, something where stability is reached with a degree of difficulty and doesn’t last for long. The sound of (just guessing) a toy piano often gives the music a sort of childhood’s memory aroma, at the same instant contributing to a kind of “complex ingenuousness” which prevents the mind from predicting the constant changes of setting proposed by the couple. It’s neither an overly eccentric work, nor exactly classifiable in a “category”; it just stays in the borderland between anarchic improvisation and nightmarish vision, without conventional reference points yet generating a sense of familiarity that helps us in recognizing the trademarks of a well-documented artistic pedigree. (Massimo Ricci, Touching Extremes)

Two more side long pieces from these two. The first side is a scuttling crab moving in and out of focus. It’s great, but the second side is utterly fantastic. A lot of percussion and drones, as well as flute sounds, etc, with a touch of faux Orientalism. Enough that bits of the music could be seen as an alternative soundtrack to Apocalypse Now!. (And I mean that as a compliment.) Vanderstraeten and van Luijk sound so together, it could be mistaken for a piece of modern classical music. (And I mean that as a compliment too.) Beautiful cover as well. (Scott Foust, Swill Radio)