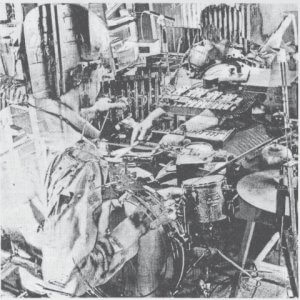 Lac Chimère is a lake in Mensono, where many unknown and untouched sound creatures reside. They sometimes form musical gatherings in which their sounds float in ether. This album consists of field recordings captured at the very moment while making an accidental stop at the lake.

Timo Van Luijk meets percussionist Kris Vanderstraeten for an enchanting exploration of liminal psychoacoustic space and animist, lower case sounds, which have been imperceptibly edited and mixed by Vincent De Roguin. Like with all his releases, this one comes with the highest possible recommendation if you’re into the most evocative strains of drone/Ambient music, and especially anything from The Necks to Leyland Kirby. The album consists of field recordings captured at Lac Chimère, a lake in Mensono, where many unknown and untouched sound creatures reside. Within that alternate dimension Van Luijk and his co-venturer wander freely, unimpeded by convention, in a somnambulant sequence of acousmatic occurrence and ever shifting temporal parameters, thanks to Vanderstraeten unique meter and the elusive/illusive plasmic qualities of Van Luijk’s haptic rustle and and shadowy timbres, which are rendered in uncannily seamless yet amorphous form by De Rouguin, who’s previously been responsible for bringing out a similar effect in Æthenor records. Beautiful, Quiet music.

This website uses cookies to improve your experience while you navigate through the website. Out of these, the cookies that are categorized as necessary are stored on your browser as they are essential for the working of basic functionalities of the website. We also use third-party cookies that help us analyze and understand how you use this website. These cookies will be stored in your browser only with your consent. You also have the option to opt-out of these cookies. But opting out of some of these cookies may affect your browsing experience.
Necessary Always Enabled

Any cookies that may not be particularly necessary for the website to function and is used specifically to collect user personal data via analytics, ads, other embedded contents are termed as non-necessary cookies. It is mandatory to procure user consent prior to running these cookies on your website.